some thoughts on blogging + other stuff

Hiii!!!
Well, i'm back again. And it looks like i'm most likely getting back into the AJ blogging community as a whole, even if i don't post everyday.
And in case you're wondering, i have my reasons for deciding to not do a daily post. For one, life's gotten kinda.. mixed up? muddled? more complicated? (wow im great at vocabulary aren't i) and it'd be waaayy too stressful for me to keep up daily posts. Second of all . . .
uh

wow ok so it turns out i don't actually have a second reason.
BUT! The first reason is still a very important reason. :P

Anyways; as for why i've decided to get back into blogging . . well, im not actually too sure myself. ._."
It's kinda complicated, i guess? And i suck at explaining? But i'll attempt to explain anyway.

Because writing proper, cohesive paragraphs is too much effort.™

Well, i think that's about it!

I was expecting more dotpoints than that. huh.

Oh!! Before i go, i just wanna mention i also want to make an aj comic because:


A) why not lul
B) I wanna practice my comic-making skills without taking comic-making so seriously
C) There is no C. This is just here to make the list look complete. owo

Problem? I procrastinate. A LOT. In fact, i bet i could be the Master Of Procrastinating with how much i procrastinate.
And, well, making a comic is pretty hard even if i'm not gonna take this very seriously.
By that, i mean it's gonna be a satire comic, for the most part.
. . .What?

I mean, THIS IS AJ GO PLAY SOMETHING ELSE IF U WANT SOME DEEP LORE™ AND CHARACTER DEVELOPMENT™

Wowe i sure am trademarking everything today. Could i trademark this blog if i wanted to? :thinking:


Weelll, that's about all i have today! See you this Thursday! . . . if i'm not too tired from exams.

Well. What an unexpected turn of events.
. . . No, seriously, i'd never thought i would ever think of playing AJ again yet here i am.

I guess the other i was feeling a bit nostalgic, so i decided to check back to see how everything's going. It seems like most of the blogging community (including the Animal Jam Spirit) has died out, which pains me to see it end like this. I guess nothing lasts forever. It was so much fun while it lasted, though, and im glad i got to be part of such an amazing community.

I kinda miss it, you know? I've had so many good memories from playing AJ and running this blog. While i won't get back to regular blogging, part of me still wants to write out my thoughts on the new updates and such occasionally.

But, that all depends on if anyone actually still reads, or cares about this blog. It's been such a long time, and it's inevitable that a majority of the old blogging fandom has moved elsewhere.

Anyways, onto the main point of this post. .
Hm, i dunno, actually. I guess i just wanted to say that im still around on AJ occasionally, if anyone wants to say hi. 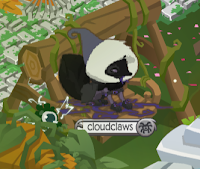