THE DUCK APOCALYPSE OF ANIMAL JAM 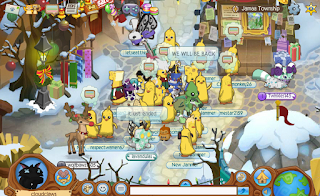 OHHH MY GOD.
THAT WAS AMAZING (and ridiculous) AND HILARIOUS (but also chaotic in every way.)

I . . don't know how to describe what just happened right now. I have no words. My brain is dead because of the amazingness and ridiculousness and hilariousness and chaotic-ness-ness and making up too many words in one sentence.


ANYWAYS;
Time to explain it for the people that weren't there for the duck apocalypse. (y'all missed out on a LOT.)

Earlier today Jamaa was RAIDED BY DUCKS.
Yup. You read that right.
"But, cloudclaws, AJ gets flash mobs all the time!" you say, "so like, why are you making a post about this?? have you ran out of content to post??"

Well. no. I mean, i will run out of content to post if AJ DOESN'T MAKE INTERESTING UPDATES ANYTIME SOON >:U  Buuuut, for the most part, no.

This raid caused Animal Jam's servers to be so overwhelmed that they actually shut down. (i couldn't believe it either.)
Yes, it was only for few minutes, but think about it- AJ's servers are built for handling MILLIONS of people. The fact that the servers stopped working, even for a few minutes, is still a pretty big achievement.

- - -
Moving on . . this isn't the main reason i made this post. I didn't decide to post about the duck raid just to ramble on about how crazy it was. I imagine many of you are pretty confused about what the heck just happened in Jamaa. So . . i bring you . .

The FAQ list! (FAQ=Frequently Asked Questions) which will hopefully clear things up a bit.

1. Who's behind all this?
- QuackityHQ is the leader of the raid, although their account got banned a while ago. They were hosting a stream on Twitch before though that's finished now too. I think they said something along the lines of they'll be returning soon but i'm not too sure. There might be more raids in the future, so don't panic if they come back.

2. Why would they do something like this?
- I'm not sure.  They're probably not actually aiming to actually shut down Animal Jam, as they claim. (By that i mean end AJHQ and prevent jammers from playing it forever, not simply shutting down the servers for a few minutes.)

They didn't know about basic things like jam-a-grams and jammer walls. So they most likely joined with the sole purpose of messing with the Animal Jam community and causing chaos, because they find it amusing.

Now, I don't have anything against flash mobs since most of the time, they're about just playing around and having fun, however, I've witnessed some ducks being mean and insulting jammers too, and that's obviously not okay. That's when it really starts becoming a problem for other jammers and AJHQ. I also do realize that its quite annoying when some people just want to hang out in Jamaa normally, but the ducks are clogging up all the servers and making things laggy.


3. What can i do if the ducks attack again?
- I've been browsing through the comment section of  The Daily Explorer and it seems like AJHQ want us to silently block and report without causing any further commotion, if they are breaking the rules. 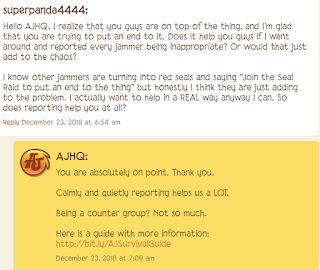 Starting another mob won't help the problem in any way. It's like fighting fire with fire - it'll just crowd the servers even more and cause more false fear and commotion. I've noticed some people doing this, believing it'll help which is why i want to speak up about it too.
I think that's about it. Hopefully this cleared things up a bit if you were confused.

My final thoughts on this event? Like i said, i don't have anything against flash mobs. For a lot of jammers, this was simply a funny/unusual event but i also do realise it's been causing problems for other jammers if they were getting bullied or insulted, or if they weren't able to hang out in Jamaa and have fun because the ducks were clogging up all the servers. When things like that happen (ESPECIALLY the bullying), i think that's when it starts bordering on the realm of being "not okay."

As a one time event? I don't think its a huge problem. But if this happens repeatedly, i can see it becoming a problem for many jammers and especially AJHQ.


Jamaa seems to be back to normal right now though. Personally, i don't think there will be a raid of that size again, since they got what they wanted. (to shut down AJ's servers, even if for a few minutes.)

Well, that's all for today. Stay safe everyone, and see you later! :3


~Cloudclaws, who still doesnt have a signature and probably never will. :p
Written by Cloudclaws at Saturday, December 22, 2018