Uhh, yeah. My posts haven't been the best these days, have they? :I
I have been sorta falling behind in homework these days just to do a daily post. Well, i do love posting on this blog, but it's just that . . well, school is important too! :c

This weekend, i will probably be able to do more detailed posts unless i go somewhere really far (in that case i might be too tired to post.) Buut, i just wanna warn you that the week after this  . . i might skip some days. So don't freak out or anything if i do skip posting. XP
It usually means im catching up with homework or it's too late to post. Well actually, now is too late to post, but im allowed to stay up late on weekends. :T

I could actually do posts all week. But they will probably be rushed and terrible, and most people here seem to prefer no posts over rushed and boring ones. :I

(also, as you probably guessed, i am doing a post TODAY.) XP 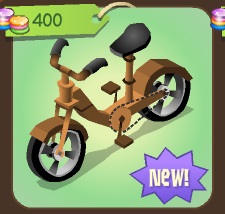 yaaaaay! I love cycling. ^_^
However, that bike looks terrible . . unsafe. o-o
It looks like the wheels could fall off any second, and you know what that means . .
You fall down as well. :T
Weeelll uhm, at least it's not a clothing item i guess! :D
That way you don't ride the bike, and risk avoided! :3
That also means the bike is useless and will rust since it's not being used, and rust is disgusting. :I
Well, it's mostly made of wood. But that means the wood will get all damp, chipped and mossy which is also yucky. XP
UNLESS it's actually plastic but it's painted like wood.
But this looks like wood to me. :T
Wait . .
Wood?
WOOD?!
Don't you have to cut down trees to make things out of wood? :O
This is it.
EVEN JAMAA HAS DEFORESTATION T_T

Weelll, at least it's not significant as it is on Earth.
*glare*

Whooaaaa
I just learned that there's a thing called reforestation which is basically the oppisite! :D
Yaaay! :3
It's not as widespread as deforestation . .
*glares*
-3- 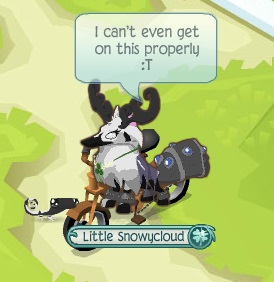 AJHQ, what's da point of making a bicycle if you can't ride it? o-o
At least it's nonmember. Yey. but neither members or nonmembers can't ride this bike.
Nuuuu.

Well anyways, i forgot to post about the jammer art thingies, so here they are now! :3

As you probably guessed, the theme is geckos! :P
I think geckos should be AJ's mascot instead of that ladybug. But the ladybug is pretty cute too. <3
I think AJHQ should have two mascots.
The AJR has two mascots. One is snowball the fox, and the main mascot is Burpygecko. :D
Burpygecko is a gecko that burps a lot. XD

Geckos can't change color though. I think that was a chameleon, but AJHQ mistaked it for a gecko. Chameleons are also awesome though. :D
I want to have a pet chameleon or a gecko, but my parents think all lizards are disgusting. :I
Well to some ppl they're disgusting. I guess that's understandable cuz they look slimy, but that doesn't bother me. ^-^
To celebrate geckos, here's a fun fact about them! :D

The only known surface a gecko’s feet can’t stick to is Teflon.
So basically, they can stick to ANYTHING. :O
(except for teflon)
I thought that they couldn't stick to numerous things. Geckos have very sticky feet i guess. :P
(That would feel awkward if the gecko was crawling up your arm . . )
I searched up teflon on wikipedia and it said Polytetrafluoroethylene.

WOW WIKIPEDIA WOW
You could have just called it "teflon" -_-
(And that is why i do not use wikipedia for school projects.)
Such complicated names. O_O

Teflon is so smooth to touch though. c:
(no wonder why geckos don't stick lol)

Also, remember the Mini-Challenge . .
AJR needs your help!
Do you have any ideas for new post segments we could do? Then feel free to comment down your ideas! The best segment ideas will get featured in a poll, and depending on which segement wins, i'll be doing the new post segment after the poll ends! ^_^
You only have 2 days to comment your ideas!