Hai! x3
*sighs*
I told you that i would have more detailed posts on the weekend. But, this weekend is just one of those busy weekends, so im sorry if this post isn't that interesting either. :c

Lately, i have had difficulty posting, and im a bit confused if you guys want no posts, or daily posts which of some won't be as interesting as the others. :I
Soo . . what's your opinion on this? ^-^
(lol is dat a weird question)
(hopefully dat question doesn't sound weird)
(for some reason i ask weird questions all the time) :T
lel
. . .
Weeelll, let's check out da new item then! :D
This time it's actually in Jam-Mart furniture. ^o^ 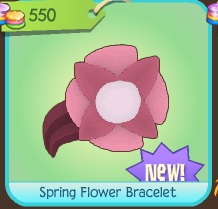 Meh just another memb- OMG IT'S NONMEMBER
YUSSSS
A NONMEMBER CLOTHING ITEM! :D
wow
It's actually happening. :O
it's beautiful
*throws confetti*
wooooo
I have no idea why i am reacting like this just cuz it's nonmember. :D
Maybe it's because the normal flower bracelet is member, but THIS one is nonmember! C:
Unfortunately, the nonmember one is more expensive than the member one.
. . .
SRSLY AJHQ. :T

What sort of flower is this though? All i see is  a random spring flower. XD
(maybe that's cuz it's what it is)
But it has to have a species . . right? :3
Nope.
NOOOPPEEE.
Remember chomper plants? Those things don't actually exist.
So these might be made up. :c
It's okai though. I liek made up species. :D
Remember those gigantic clovers from the lucky day adventure? o3o 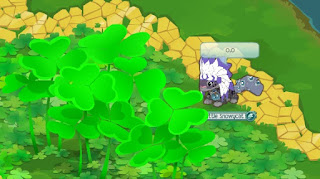 lol remember dat.
I called them Trifolium corde magno, with the help of Google Translate. XD
(It means Great Heart-shaped clover in Latin cuz everyone uses Latin.)
Why is latin to difficult. :T

Why do scientists even use latin?
It's so difficult. Also no one uses the language anymore. Except for scientists.
Why not call everything by their common names? Then everyone would be happy, and no one would be confused. C:
Maybe it's to classify the species better. Idk.
Common names are gud.

I want 2 see how dis bracelet looks like on your animal avatar. C:

oohhhh
Nice. :D
In fact, it looks better than the normal flower bracelet.
It might be expensive, but it totally pays off. :D
Im gunna be wearing this to celebrate spring cuz spring is awesome. x3

Speaking of spring, you probably noticed the new blog header when you came to the blog! :3
And you where probably liek: WAAT IN JAMAA WHY DOES THIS BLOG KEEP CHANGING HEADERS?!

(nu more header changes for the rest of spring) c: 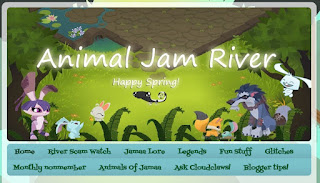 Yeh . . what do you think? :D
Well i basically added the graphics onto a lighter, more cheerful background cuz spring is cheerful. :3
Buuut, i like how this header looks, so do you think it should be permanent, or is the old one better? c:

OMG YUS
Episode 3 of the Dawn of the alphas! :D

Episode 3 – Rise of the Phantoms

The phantoms came through dark portals and they quickly spread through the uninhabited regions of Jamaa. Wherever the Phantoms went, they left a trail of spoiling destruction. Rivers were polluted, trees became bare, and the air was thick with noxious fumes. The Phantoms consumed everything in the environment and gave nothing back. They leveled entire villages the animals had built and left the entire civilization in pieces.

Mira and Zios watched in horror as the Phantoms spread throughout Jamaa. As guardian spirits, it hurt them to see the land they loved become corrupted, and they knew they could bring Jamaa back to life if the Phantoms were repelled. In time, they could make the skies and waters clear again, and if they could recover the lost Heartstones, thousands of animals could return to Jamaa. As time drew on, however, the Phantoms threat grew only more fearsome and unstoppable.

Nuuu phantoms! D:
But . . In this story AJHQ is just being liek: o look here are some phantoms no one knows where they came from lol

If no one knows, then how come in the older story, it EXPLAINS how phantoms are made? :I
Is AJHQ a liar?
*GAAAAAAAAASSP*

Orrrr as i said earlier . .
Da story of how the phantoms came is too deep for younger kids. :T

I though pollution and stuffz didn't exist in Jamaa. But it does.
In the form of phantoms. ;-;
WHY MUST THERE BE NO ESCAPE FROM POLLUTION?! DX

Wait wut.
Don't Mira and Zios have the power to defeat the phantoms? Maybe they can attack the phantoms if they are so sad about their land being lost . . ?
DO SOMETHING, MIRA! OR ZIOS, or . . whatever. XP
Maybe that's impossible or something cuz the phantoms put a curse? idk.
AJHQ, i need moar details plz.
I love details. c:
That probably sounds creepy. C:
huehhee
C:
*creepy smile*
o3o

Well to end the post, here's the QOTP! :D
How exactly do you think the phantoms came?
Bye for now! ^-^