Hai!! :3
Yup. Im back 2 doing normal posts again. x3
That doesn't mean im gonna be abandoning Sir Gilbert's story, but over the next few days i will be planning out chapter 2. (maybe even chapter 3!)
Why?
Cuz i have a mild case of writers block. ;-;
But before, that, it used to be REALLY bad . . so im finally overcoming writer's block. Yay! x3
Today's the first day of May.
CONGRATULATIONS!

You pplz are in spring meanwhile im freezing over here. xD
Well it's not THAT cold outside . . but my house was designed to keep cool in the summer or something, which unfortunately means that my house is very cold during winter. :c
It's okai though. I can just drink hot chocolate XP
(Actually, i rarely drink it cuz im too lazy to make it) lel
:T
Hot chocolate is yummy though. :D
Also, you know that "skin" on the top of the milk when you leave it for too long? Idk what's it called but when i was younger,i used to hate that stuff . . now i love it. XD
It's weird how you like different stuff as you get older. O_O
(Im still never eating olives though . . . they smell disgusting. What if they taste disgusting?) DX

I love spring. So many flowers and . . stuff. XP
Autumn is kewl cuz it's slightly rainy :D
If you write "kewl" on animal jam, the chat changes it to "cool." Or maybe that was if you wrote "kool" :P
It's sometimes annoying because i sometimes WANT to write "kool" or "kewl" instead of just the plain old "cool."

Eeerrrm wow. I sure wrote a lot of random stuff. O_O
But i haven't logged onto AJ yesterday. So today i did.
Turns out . . There was an update! :D
It was small though.
THE COMING SOON THINGY HAS FINALLY BEEN REVEALED! 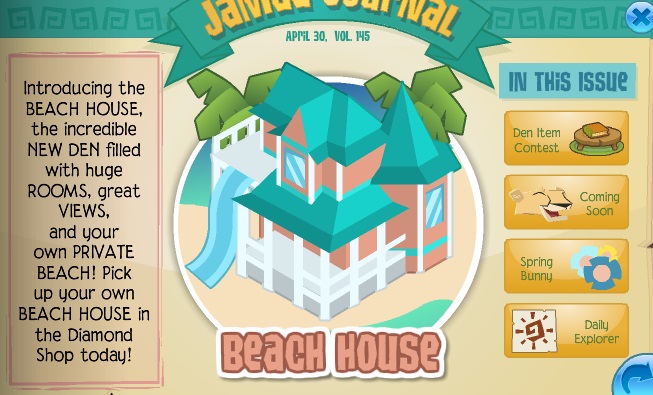 YAYAYYAY!!!!111 NEW CRYSTAL SA- wait wut.
More plastic stuff? :I
Owe.
Nevermind. It's only a house. :C
AJHQ, y u no redesign Crystal sands? >:U
Well, ig uess a house is okay. If the house wasn't filled with even more plastic stuff.
Srsly. Whenever AJHQ thinks of a beach, they think of chlorine-filled waters with plastic slides and plastic everything.
But whenever i think of a beach, i think of cliffs and rock pools . . yeh . . rock pools are awesome. :D
If it's a large rock pool, you can see some small fish. I sometimes think about touching the fishes but then im like: "OH NUU WHAT IF THEY'RE POISONOUS?"
So yah. :T
Also, lionfish are poisonous. Or venomous. Idk.
XP
I watch videos on people petting fish like they're dogs. Don't ask XD
Imma try dat with my fish on day :D
(if only i can stop worrying about bacteria and stuff)
Also cliffs. I like climbing cliffs. If they aren't too dangerous or difficult to climb.
(i may be a scaredy cat . . . ehehe . . heh . . )
Also, i don't like overly crowded beaches cuz i feel exposed . . o-o
One time i was walking along side a beach, and i saw pieces of jellyfish or something washed up on the shore. Eww.
(they looked disgusting) -_-

Also, the reason i hate chlorine is because my eyes get puffy and irritated whenever it comes in contact with it D:
Also, goggles leak. All the time.
One case i had pinkeye because of the chlorine. :I
So basically just . .
UGH. CHLORINE.

(salt also kills most pathogens . . maybe . .  why not salt?)
I refuse to call them germs. >:U
I generally hate the word "germs" in general, idk it just sounds bad so i try to use "bacteria" or "virus" or as i said above, "pathogen."
Pathogen is more accurate in general cuz it's referring to stuff that cause illness.
But germs mean ALL microorganisms. so yah.
. . .
(perhaps pathogen and germ mean the same thing . . not sure)
I also hate the word "microorganism" because it's all mixed up and jumbled up.
I WILL NEVER ESCAPE FROM THIS NIGHTMARE ;-;
Whoever named these things  . . *applauds sarcastically* 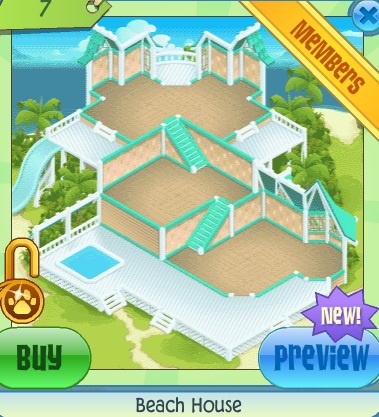 Eh. I guess it is a good place to have vacation. Still looks a bit artificial or plastic to me. :T
Also, the pool. It probably has chlorine in it. EW.
But other than the artificial - ness and plastic - ness, and the chlorine pool, it's a nice den. :3
Also it isn't horribly gigantic, like the greely den. *glares*
I might buy it. Maybe. Idk. :T
OMGGGGG
omg
NEVERMIND PPL. 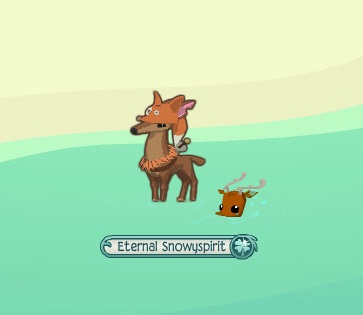 THERE'S AN OCEAN!!! :D
Probability of me buying this den has gone up by 20%. There's a 70% probability i might buy this now.
yey
Im probably gonna buy it :3
But im gunna decorate it was plants so it looks more like a beach. ^-^
(i believe that beaches should have sand dunes, cliffs, and rock pools in them in order to be a beach.)

Well moving on, let's check out the new item! :3 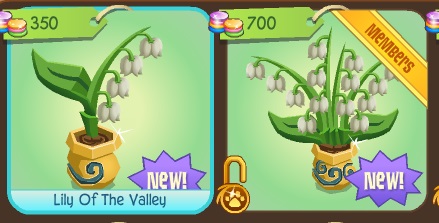 "Lily of the valley?"
Sounds like a very interesting name . . :3
Also, it looks pritty and beautiful.
Im going to google this flower up. ^-^ 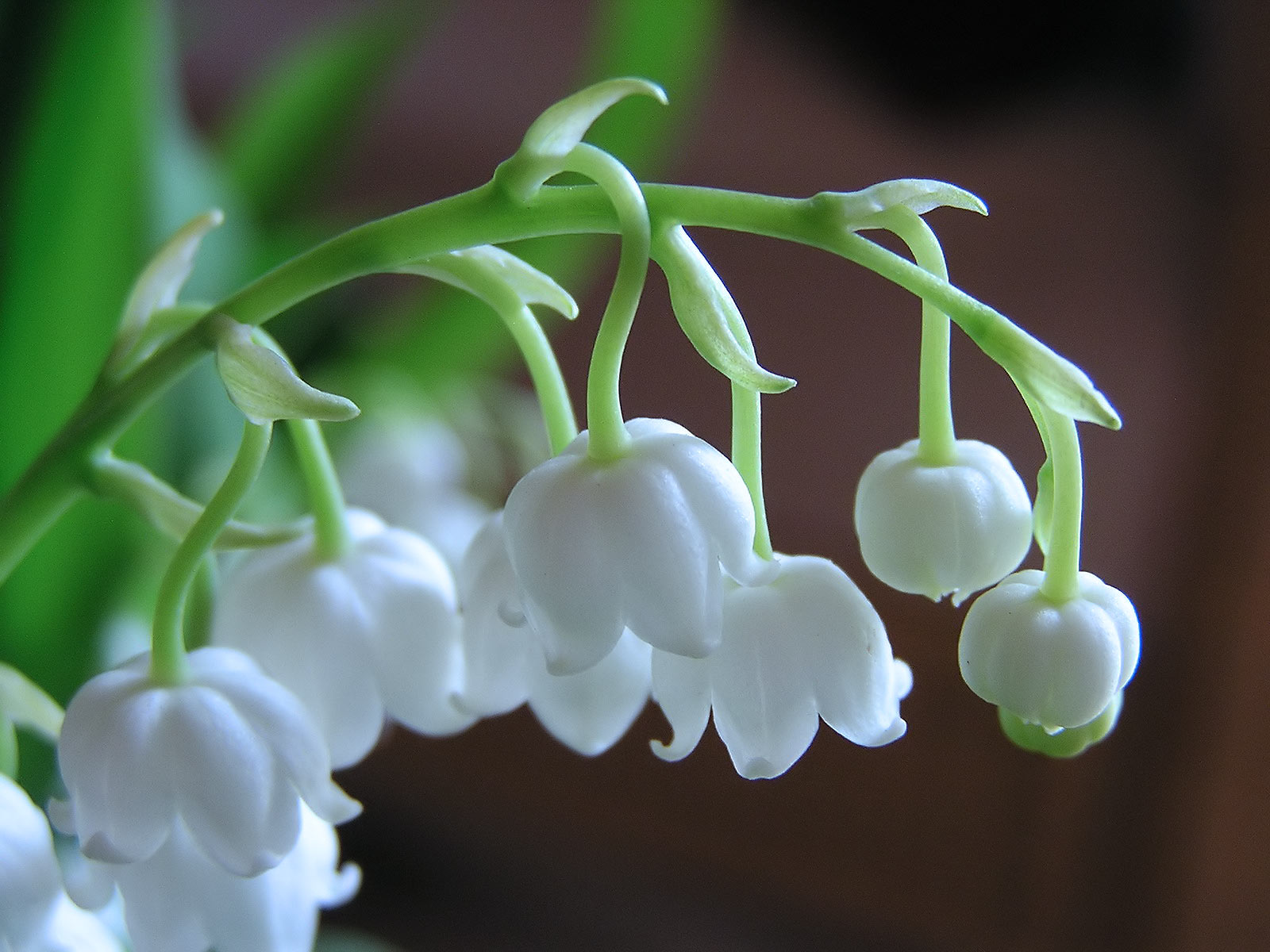 Omg :O
They look even prettier IRL. :3
Owe.
I just learned that they where highly poisonous. ;-;
That's a shame cuz they look so perfect. Like statues or something. Idk.
AJHQ made them look sorta dull in color, but in reality they're as white as puffy clouds. ^-^
I love clouds. Which can be seen by reading my username. X3
I basically like all sorts of clouds. Even storm clouds. Storm clouds look so dark and gloomy though . .  . .  o-o
That's what i like, i guess. Sometimes you think that fluffy clouds are too perfect and beautiful and you just want to see storm clouds. :3
Well for me, it's like that . . idk.
As long as the weather forecast doesn't say there's a tornado coming or something. O_O
(there's never tornadoes here anyway though . . )
I like lightning, but i hate thunder.
:T
Whenever there's lightning, i go up to the balcony and watch. But whenever there's thunder, i just curl up in the laundry room ;-;

My favorite flower is a daffodil. But sometimes they are waaay too yellow and bright. I like snowdrops. They look very winter-y. ^-^
I liek snow :D
Which is usually why i prefer the color white over black. Also why i like white, puffy clouds. :3

I keep talking about clouds. -_-

^ Did any of you actually understand that? XD

I liek flowers.
*explosion of flowers*

The bouquet looks way too mixed up. I prefer nonmember one.
DAT'S RIGHT, AJHQ.
JUST MAKE THEM BOTH NONMEMBER ALREADY -_-

Stahp making one nm, one not cuz it's rlly annoying. >:U

Well anyways, you probably noticed the new change to the tabs.

I put all of the pages for easier navigation, and so that new viewers can see all the pages. ^_^
What do you think? Does it look ugly or jumbled up? :I
Or does it look fine?
Cuz i haven't decided.
And i need your opinion to whether keep it like this or not. c:
(cuz i have no idea . . )

Moving on, let's check out the "jammer snaps" winners! :D

Whoaaa.
Okay.
Those are some AWESOME snaps.
Best i have seen so far.
Gud job everyone :D
I love how there's "lion" written in torches. It must have costed lots of gems to make that. O_O
Also,  the lion pride looks bootiful. :3

Well to celebrate lions, here's an RAWRsome (omg i should stop) fact! :D Females do the majority of the hunting in the pride.
So basically male lions just sleep and be lazy. XD
Just kidding. I don't know if they actually do that. :P
I think we should be able to have female lions on AJ, Sure, they might not have the amazing manes of males, but their faces are more beautiful. :3
^ You probably think im weird for thinking that females have a more beautiful face. :T
XP

Well unfortunately, that's all i have for now! :3
Bye for now!