Hey everyone! ^o^
I don't have much time to post today either. But anyway, the Jamaaliday gift is . . .
*drumroll* 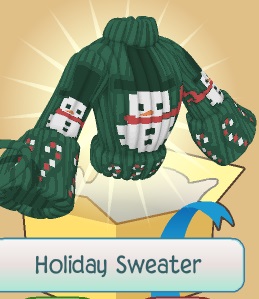 Aww i was hoping this was something new. :c
*clicks decline*
Oh well. It's still a very cute sweater. ^-^
But that loop is annoying. Why is there a loop on every sweater?
As the title suggests, the item is the Jamaaliday lights, sold in Jam-Mart .  . I guess we know what.
(furniture! xD) 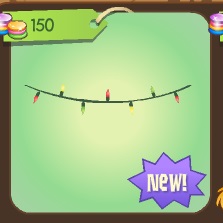 It's sort of too simple for me. :P But it's cheap and nonmember though. c: (mainly cuz it's a very simple item) But it's still nice c:

But srsly. Why do i keep using the c: face. Noo just did it again.
Nothing to post about now, so im just gonna check the DE.
Oooh! Paper toy printables! :D

Dis is awesome! :3
That rabbit's chin is too um, long though.

Click here to see how to make one!
I guess that's it. I know, this post was terribly boring again. -.-
Bye!

Click here to see my videos
Written by Cloudclaws at Sunday, December 07, 2014