Hello! :D
Im back, and guess what?
TODAY IS MY BIRTHDAY! :3
Okay, i should have told you earlier. And i should have planned a party .. *facepaw* I is stupid :c
Do you think i should do a party later? Or would it be too late? Idk.
Such confuse :c

I didn't get my gift today though. It's coming on in Thursday.
IT BETTER BE A BICYCLE OR ELSE. >:C
A xylophone would be okay though. I love playing instruments. I just wish i could buy a piano and play it all day. :3

No offense. Cuz that's just my idea. And all of us here are allowed to have ideas and opinions,
Because if we didn't it would be stupid. :I
Having opinions is kewl. 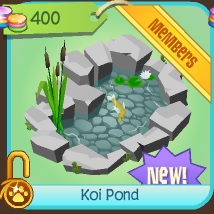 Why is it awesome? Because it's a pond. I love ponds.
Also, just because . . .  I LOVE KOI FISHIES. :3
They are epic, colorful and bigger versions of goldfish, But their tiny mustaches are what's the most epic. c:
Look at dis adorable fishie. Look at it's adorable mustache.
LOOK AT IT. >:U

I wish i could have one, but i live in an apartment. :c
Im also wishing for so many stuff. XP

I WANT EVERYTHING I WANT >:U
But i only get one thing because that's how birthdays are. :c

If i got everything, then i would suddenly go crazy and run around the house and then not know which one to look at first and then faint because of confusion and craziness.

I WAS GONNA TYPE SOMETHING BUT I KEPT ON MAKING TYPOS SO I EVENTUALLY GAVE UP.

. . . i just really really hate typos.
Typos happen when you type super fast compared to the class. XP
If i type super fast, then why do my posts take around 30 mins to type?
I have no idea. Honestly. :I
Maybe it's because in that 30 mins, i do other stuff like homework for 2 mins and then go on the computer again, but other people usually just type it all up in 15-10 mins. :P

Moving on, let's check out the Daily Explorer for cool stuff. :3
*goes to the DE*

Today's artwork is about the Alphas! :3
The sir Gilbert one looks amazing. He looks proud and strong. :o
(and also handsome. wait, what?)

Liza looks like a kitten. Because she's so cute. c:
And kittens are very cute, aren't they?

Those two are my favorite.
NO.
ALL OF THEM ARE AWESOME. C:

Good job 2 everyone! *clap clap*
*gives them leftover cupcakes from my birthday*

Kidding, i have no leftover cupcakes.
I ate dem all.
C:

Speaking of art, i made art of a koi fishie because remember what i said?
KOI'S ARE AWESOME

It was very rushed so it looks terrible. But i wanted to post it 2 join in the fun. :D

Im gonna finish it tomorrow. Maybe.
If im not lazy.

And since this post is focused on Koi's, why not celebrate with a koi GIF? :3

They swim so beautifully. :o
I wish i could swim like that. But i never will, because i have lungs. Not gills. :c
Maybe i can repla- NOPE NOPE BAD IDEA. O_O
Gills are too small to fit in a rib cage. But maybe we can somehow enlarge them?
NOPE NOPE NOPE
Then we would have those slit thingies on out chests and that would look weird.

Also, in case you haven't heard, be sure to check out the brand new page! :D

It's located on the LEFT SIDE of the blog!
It has lots of info on scamming. But NOT how to scam though. XD
That would be the worst idea ever. DX
But, i also wanna tell you something else.

Since our goal is to stop the scammers, i decided to write how many scammers where caught so far at the end of the page. However, we have caught only 4 scammers, and our goal is to reach 100 so if you have stopped a scammer from scamming in the past few weeks, then tell me in the page's comments! :3

^ Thanks for reading that boring text.

I feel dizzy and i feel like vomiting. :C
I should probably stop posting now.

But before going, the answer to the True or false question was . .

Believe it or not, rats DO laugh when tickled! (although their laughing is not like a human laugh)

I think that question was a bit too hard for you guys, so this time it's a little easier. :D

Written by Cloudclaws at Wednesday, March 25, 2015