Hello jammers! :D
Anyone on Spring break yet? I will be on Autumn break in around 2 weeks. yay! c:
Unfortunately, the holiday is only 2 weeks as well, but at least it's 14 days, right? :3
I mean, 14 days is a long time . . sort of? No?
I wish it could have been 4 weeks or something. What about we have 6 month holidays, twice a year? :D
Oh wait. That would mean no school . .

What about there are no such thing as jobs or school and we just buy whatever we want? :D
But then everything would go out of stock way too quickly and people would get angry . .
Let's just keep stuff the way it is for now. o-o
(Except for more holidays . .? plz :c) 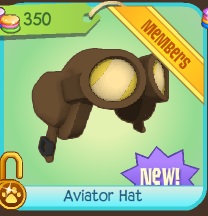 It's sold in Jam-Mart clothing because hats are clothing items.
What's the point if it's just lying around in your den? :P

I remember when this used to be one of my favorite items. I just thought it looked cute. Don't ask. XD

*checks through inventory*
Oh. It seems as if i recycled it. :c
Idk. Why did i recycle it? It still seems like a cute item to me. Maybe because i got new items for my animals?
But it would have been fun to keep it . . cuz it looks cute . . and i like to hoard clothing items . . which is why i have over 200 items . . "^.^ 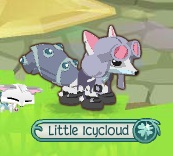 I have a tendency to think about weird things like "why do viruses exist" and stuff like that. Most of you probably noticed by now. XD

Has anyone else wondered weird random thoughts about stuff? :T

Anyways, i was checking out the lion minbook thingy and i noticed this little guy on the front page.

It's a tiny warthog.
Do you know what tiny animals means on AJ?
It means they are pets! :D
Cuz normal Arctic wolves= HUGE but pet arctic wolves = TINY

So could pet warthogs me coming out in the future? :3
It looks cute, but i don't think it would be very popular because no one really seems to like warthogs. :c
poor warthogs. :C
I think they look sorta cool, because they are pigs with tusks. :D
So elephant + pig = WARTHOG!

Platypuses are very strange animals. O_O
I heard when first discovered, people didn't actually believe this existed and some random guy had sewed on other animal parts to a beaver. But of course, that turned out to be fake.
Since i included a picture of a platypus, here's a picture of a warthog! :3

Warthogs also look a tiny bit like a horse, because they have a small mane thingy at the top of their heads. :P

Another possible new pet i noticed was a meerkat! :3

I think this would be more popular, because so many people love meerkats. :D
Also, meerkats look a tiny tiny bit like cats. Cuz of their ears.

Conclusion: Meerkats are a mixed up species of many animals.

^ LOGIC. *does derpy face again*
Also, i forgot to mention that they look a little like humans, because they stand up.

And they can also smile. Sort of. XD

He's like: HERE HERE COME
And then the other is like: *runs fast*
And then the both hug each other very tightly.
So cute. :3
(Also a little funny for some reason . . idk.)
Funny-cute. :P

Chu want another GIF? Im gonna post it anyway.
EVEN IF THE ANSWER IS NO. >:C
(But who can say no to cute animals? :3)

He thinks it's actually a real squirrel. XD
So he's like: *creeps up silently* Act natural . . *steals a thingy*
AHH RUN

And then this other random squirrel jumps out of nowhere and ambushes the plushie.
The ending is very surprising though.
KABOOM
O_O

Guys, i think have have an addiction to doing these true-or-false thingies.
I love doing them. O_O
And i must do one for today as well! :3

Dolphins don't exactly have names like we do, but they call each other by different sounds. :3
Good job to everyone who got them correct! :D (There was actually a fair bit of people . . )
Here is the third round of "True or false?"

Good luck! :D Today's question is a little harder in case some of you want something more challenging. :3