Hai! :D
School is tiring me out so much these days.
I don't think i can function properly anymore. :I
I just wanna sleep in every day
^ But that is not happening. :C

At least we have another amazing item to make up for the terrible RIM. :3 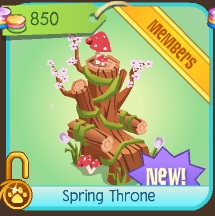 This is apparently sold in treetop gardens, but it looks like something from Epic Wonders. Yay for springtime though. :3

Aaand meanwhile in the southern hemisphere, the weather is starting to get chilly. (Although today was warm.)

Weellll uuhhm let's just write about how awesome this item is. :D
This item is awesome because it has vines and other nature-y stuff wrapping around it, which makes it look generally awesome. :3

And it's still awesome even if it's just a bunch of wooden logs with a bunch of vines wrapping around them.

Why do i have the terrible habit of using the same words all the time? :/
Maybe none of you noticed though. And now you noticed cuz i mentioned it.
XP

Let's take a look at the Jammer Artwork! :D

Some of the phantoms do look angry about being a flower though. :P

Great job to everyone who got featured! C:
Every one of those artworks are clawtastic. :D
(Is clawtastic a pun? I don't know. X3)

Remember when AJHQ's posts used to have lots of puns?
*sigh* those days . .

I sound like an old person now. XD
lolz

In case you had a bad day today or just generally feel stressed (Like i do at the moment. :c) here some some adorable GIFs! :D

And now be happy by all the adorableness. <3

But i always feel like the fluffy animals get all the attention. So here's a cute picture of a tiny chameleon. :3 Those eyes tho.
So adorablezzzzz

Those eyes again.
im dying omg
(^ not really though so relax.)
XD

I wanna do more, but i don't want the post to be taken over by cute animals. XD

I can't really find anything else to post about anyway though, so here's the Mini Challenge! :3 Redesign Jamaa township!
What new buildings will there be? Will it be more like an actual city, or a village? Get creative! :D

Written by Cloudclaws at Wednesday, March 18, 2015