Sorry 'bout not posting yesterday. The electricity went out again because the weather hates everyone right now. :I
I just realized i have 15,160 gems on AJ. o-o
I haven't had that many ever since AJ stopped making new adventures. Remember those days when there was actual adventures that dumped you with a ton of gems? C:
Yup.

But the seasonal adventures also dump you with gems. lol. XP
But in the actual adventures you also was liek, SAVING THE WHOLE WORLD?! >:U
Not really. Just Jamaa. XP
But Jamaa is basically the whole world for AJ . . right?
So pplz, the conclusion: YOU JUST SAVED THE WHOLE WORLD WHEN YOU DID AN ADVENTURE. :O

I just played a ton of mini-games. The twister music was rlly dramatic. o-o
I will now play twister just for the epic music. XD
(Twister is a very easy game.) :T
. .  . Or i can just find the music somewhere else like youtube or stuff. xP

Also  gem breaker is suddenly fun. Idk. I used to think it's boring now it's fun. O_O
But the best game is .  .
SKY HIGH. :D
Srsly people. That game = AWESOMNESS
It's also the most popular game on AJ. No wonder why. XP
Cuz it's awesomness. :D
. . .
*another awkward pause*
I keep pausing awkwardly. >:U

Well to avoid pausing awkwardly, i shud check out the new item! :3 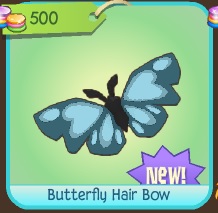 Why did i freak out that much. o-o
(Usually i don't freak out that much when i see someone cute.) :P
UNLESS it's a bunny eating a raspberry. Raspberries make the bunny's lips look red which makes them look like they have lipstick. XD
Did i just make a grammar mistake their there?
Cuz i rlly rlly hate making grammar mistakes. :c
Hopefully not. lel.
Some teachers think i don't know english just cuz i don't speak much in class.
*facepalm*
*face desk*
*face wall*

^ That is all i can say. :I
Wait, i never said anything. Nvm. XD
Also, my forehead hurts. xP
(Well i shud not have face desked.)
O NO.
Did i just make another grammar mistake? D:
(Is "desked" a word?)
Wait, i don't think that's a grammar mistake, more like a spelling mistake. XP
Also, blogger is being laggy again.
Plz blogger. -_-

PLZ WORK PROPERLY, IM USING GOOGLE CHROME OVER FIREFOX JUST SO THAT YOU WILL WORK CORRECTLY D:
Btw i like firefox better than google chrome even though chrome is after.
firefox4life :3

(uhm did that sound creepy and/or stalkerish?) o_o

I just realized the butterfly hair bow is nonmember.
*explodes again*
Wait . . how can i explode if i exploded already? How can i even type if i exploded.
*gaaaaaaaaasssp*
Maybe i didn't actually explode. :T
lel
By the way im not exploding cuz of anger like i usually do, but because of happiness and overwhelming cuteness. :3

(wat)
A nonmember AND a good item AND . . no wait it's expensive.
:C
y u be expensive.
Buuuut it looks AWESOME :D
Butterfly hair bows are awesomeness, just like sky high. :3
Or shud i say "pawsomeness?" :P 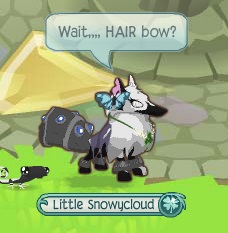 HAIR bow?
Does it look like there's any hair? >:U

Well i think hair is just a thicker version of fur.
Idk what the big difference is though. :I
Both are made of keratin and look same.
sooooooo umm
Is there anyone that knows why they're called different names? o_o
(cuz i don't)

Well moving on, the winners of the imagination fair have all been revealed! :D

I forgot to enter. :T
I didn't even draw the invention.
WHY DO I KEEP DOING THIS DX
I hope there's another contest like this soon. Maybe a contest that's only about animals or nature? That would be cool. :3
But anyways, the winner for maths is Queen Arcticwolf, and her amazing invention is the pet calculator! :3
It's a pet.
That's a  . . CALCULATOR! :D
Im not sure how that works, cuz IRL there's no animals that are like calculators. X3
Maybe it's like a robot that acts like a pet? c:
Also, remember the engineering winner?
They're both pets so does that mean that AJHQ is going to make a robot pet soon? :3
I hope so . .  waaaaait i see a pattern here.
All these inventions, AJ can use them somehow for the game, so maybe . .
*gaaaaaaasp*
THIS IS GONNA BE AWESOME! :D
I really hope AJ adds them to the game. c:

Well anyways . . AJ is rewriting the story of Jamaa! C:
However, this time it's called the dawn of the alphas . .

The Dawn Of The Alphas — Episode 1

amaa was once home to hundreds of animal species of all shapes and sizes. These animals spent their days playing games, going to parties, building homes, and living together as friends.

Mira and Zios, the guardian spirits of Jamaa, gifted each animal species with a Heartstone, a special jewel that contained the essence of that species and held the secrets of its magic.

For many generations, all the Heartstones were kept together in a vault beneath the Lost Temple of Zios. Every animal could visit them and see the unique gifts that each species brought to Jamaa.

I thought AJHQ had completely forgotten about Jamaa's history. Im glad that they are writing the newest version of it so that jammers will know all about Jamaa! ^-^
Unfortunately, that's all i have for today. Bye!