hai ppl. XP
I don't have much time to post today. :C
Im still gonna try not 2 make it rushed, cuz i don't like making rushed posts. :C
So im gonna type in my normal speed. Which is super fast. So yahh. :P
Im the fastest typer in the whole class. o-o
Does that sound like im bragging? Cuz i hate bragging. -_-
(btw im not bragging even if it sounds like that to you)

I have nu idea. XP

If you want to type fast, then be warned that you will make 1000 typos per sentence.
(Of course, not that much . . i was over-exaggerating. XD)
So be glad with your careful typing skills if you don't type fast. c:

The only reason my posts my posts have okay-ish spelling is cuz of auto correct.
So thank you auto cucumber. :D

The computer's auto correct is not like that though. If you type something wrong, it just underlines it in red instead of attempting to spell it correctly. Which is why we end up with "auto cucumber" instead of auto correct when typing on a phone. XD 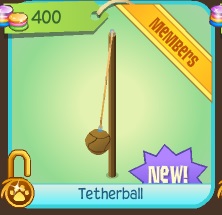 Tetherball?
I know the game existed, but i didn't know it was called "tetherball."
I don't know anything about sports. XD
I like tetherball though. It's fun. :D
By that i mean i hardly play it but when i do it's fun. lel.
. .
Umm yeah.
I guess i should see if this item is small or big. :P
It looks pretty small, so it's probab- OHHH GOSH. NOT AGAIN. 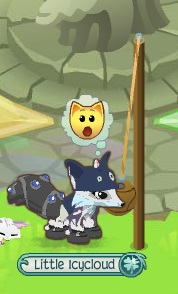 Note to self: Whenever you see a sports item on AJ, do NOT expect it to be small.

It's taller than me.
The ball is nearly as big as my head.
HOW AM I MEANT TO PLAY? DX
This is why sports items on AJ are pointless. :T
hmmmmmmmmm
*thinks about how 2 play*
I has idea! :D
*clicks the ball*
*it starts spinning BY ITSELF*
. .  What.
This tetherball pole is haunted by ghosts playing tetherball . .

Shud i be scared? :c
Im not rlly scared of ghosts . .
Ghost: BE SCARED >:D
*hides under a table*
I is scared of ghosts when they talk. :C
Im recycling this tetherball pole.
*throws in the bin*
Note to self: Never buy sports items again.
UNLESS i want to see what it looks like . . which is what happened with this tetherball. And the four square court.
I just wonder what items look like, and then i recycle them. :P
(which is why my inventory is nearly full at the moment.)
*recycles other item*
Now my inventory has 2 slots remaining . .
I need 600 den slots in order to satisfy my needs. XD

Kites are so awesome. :3
This is actually strange because of the storm that has been going on for 3 days now . . and storms = wind sooo . . :T
Well actually it wasn't THAT stormy today. But there was a whole lot of rain. XD
So it was a . . rainstorm? Does such thing even exist? XP
It also means i have been locked up inside for 3 days and im so BOREEED. :C
When i wished for rain, i only meant a sunshower or a light sprinkle . . not a huge storm. :I
I actually did wish for rain. Well i didn't WISH but i just hoped it would rain because i like the rain . . but only if it's not a huge rainstorm.
(Again, rainstorms probably don't even exist but im still calling it that)

Anyways, let's concentrate on the artwork! :D
I think every one of these drawings is awesome cuz AJHQ always picks out awesome drawings. :3 (thats a gud thing)
This gave me an idea for a drawing, I should draw an eagle flying while flying a kite. yey.

DOGE-CEPTION! :D
(Warning: If you stare at this for too long you might be hypnotized . . idk cuz i never looked at it for super long)

Wat.
That was random. O_O

Dogs are cute. Cats are also cute.
Cats and dogs are both funny. But i think that cats are cuter, and dogs are funnier. That's just my opinion though, you might think the oppisite. XP
Well since i posted a doge GIF, here are more doge GIFs.
If you don't know, the doge meme is basically a dog thinking about stuff in dog logic. XP True or false?
The closest relatives to the elephant shrew are actually elephants, not shrews.
Bye 4 now! Sorry if today's post was sorta uninteresting .  . as i said earlier, i didn't have much time. :c

Written by Cloudclaws at Wednesday, April 22, 2015