Hai everyone. c:<
Welcome back 2 another update post. huehehe.
Today, i got this cool USB lamp thingy. If you connect it to your computer, it lights up. It's like a desk lamp but much cuter and tiny. :3

TINY = CUTE
WE ALL SHUD KNOW THAT! >:U
lawl.
wut.
The light is super strong though. I accidentally shone it into my eyes 4 times and counting. :C
My eyes hurt. D:
it's okai tho. it will b fine, right? :3
(of course . . hopefully ehehehehehhe)
Owe no i just shone it into my eye for the 5th time now. :I
You know when you have to look up into the sky to see something, and you accidentally look up at the sun?
Most annoying thing EVER. -_-
Im just trying to look at the sky for reasons and then WHAAAT LOOK AWAY THIS HUGE BLINDING LI- o wait it's the stupid sun.
Sun: if you look at me you will be PUNISHED! MUAHAHAHA 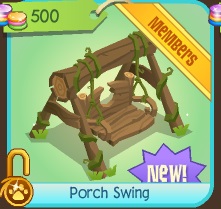 Wait. Maybe it's just cuz AJ decided to change the shops. Yeah. That's more logical . . heehehe ^.^"
There's also the beta porch swing, which is funny cuz i was posting about beta stuff earlier that day. XP
I think this one is better. Cuz of the vines wrapping around it. :3
I LOVE VINES! (But not poison ivy . .  poison ivy sucks because it's poison.)
I heard some people aren't poisoned by poison ivy, but it's just a small majority. Still pretty awesome.
*gasps* MAYBE IM IMMUNE TO POISON IVY AS WELL? :O

Idk. I never touched one. :I
. . . And i don't plan on doing so. Just in case im not immune. Which im probably not. Because i am super average. Okai, maybe im not that average. I don't know if im average or not. :P

I also like how the fireflies fly around the porch swing. So yah.
Fireflies look so beautiful. :3
I never saw one though. :c
Do fireflies even exist where i live? THEY HAVE GOT TO! THEY'RE TOO BEAUTIFUL. :C

Fireflies are beetles. But everyone knows that. Or maybe you don't. XP

It's so pawsome how some bugs can light up. Glow worms look like spiderwebs, but 20% beautifuller. :3
Fuller . . ?
(i made 2 references to 2 movies yey)
*earns trophy and chocolate for 2 refrences to 2 movies*
*becomes rich*
*becomes famous*

Hmm . .  no Wikipedia article on it?
SUCH THING DOES NOT EXIST! AJHQ made up this day. >:C

Wait, nvm. It sort of does exist, but it was on March.
It's April.
. . . . . .
I don't understand. Im too confuse. :C
I think this entry is from a while ago, but AJHQ didn't find out about it until now, but they liked the - DID AJHQ ALERT US ABOUT THIS EARLIER? D:
ugh. I never ever get to know about jammer snaps contests. :C
It's okai. I never win anyway. :D
(maybe it's because you almost never try to, cloud.)
Imagine if AJHQ told the actual usernames when someone won something. o3o
That would be cray-cray, cuz the jammer would suddenly be getting a ton of fanmail just cuz she/he won the contest. XP
I guess AJHQ doesn't want that to happen though. Because 2 much mail at once can be overwhelming. D:
Speaking of mail, you know how the JAGS are so restrictive?
Why is it that the normal chat is more free, but the JAGS aren't? It does not make sense. -_-
I know AJ is a game and games don't be sense, but this is sorta different.

Also, why am thinking about melted cheese, WHICH IS A TRYPOPHOBIA TRIGGER FOR ME?!
Lotus pods alone aren't a problem, but when lotus pods are photoshopped onto skin . . DON'T EVEN

Is being scared of weird holes ON THE SKIN an unusual thing?
Holes on skin indicate some weird nasty infection or something. Infection = bad.
WHY DO PPL THINK TRYPOPHOBIA IS FALSE?! ;-;

Btw im a visual thinker so that makes it worse .  .
Some people aren't visual thinkers, which is strange to me. When i say "chocolate," doesn't everyone see a picture of a chocolate bar in their heads?
(liek, they actually see a picture . .)
I see 3 blocks of chocolate against a white background, arranged in a pleasant way. ( you know how ppl arrange food so it looks more appetizing?)
I thought everyone thought like that, but apparently that is not the case . . :o

That is actually interesting to me. XD

I don't really know what else to post about . . Cute animal GIFs? :D

But anyways, we haven't done this in a long time. but im gonna do a raffle! :3
If you win, you get a shout out. So it's just something for fun. :P

Unfortunately, i have to go now so bye! :3

Written by Cloudclaws at Wednesday, April 08, 2015