Horned Leg Pads are back

Hai. XP
How have you all been? :D
Gud, hopefully.
Schools starts on Tuesday for me. ;-;
But then again, we only do exciting stuff on the 6 week long summer holiday. In these short breaks we only go to normal places and normal stuff is 2 boring for me. XD
School is also normal though. And it's more boring. :C
(math, ew)
At least we have breaks though. It would be terrible if we didn't. o-o
No offence if you like maths though. I sort of like geometry. But the other parts are just boring for me. :T
(im also good at geometry because i like it.)
I think the reason im bad at maths is cuz i don't like it. o-o

However, on the other hand, im amazing at spelling but i don't like spelling. :T

I think the reason i don't like maths is cuz im bad at it so i get stressed out. :C
(it's like a never ending cycle)
I need 2 learn 2 like maths, then all my problems at school shall be solved.

wow why r we talking about maths? XP

Well let's move on and check out the now item. :3 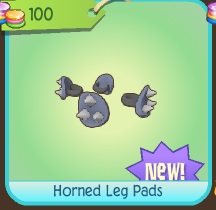 Yuppp.
The horned leg pads are FINALLY back! :D
And plus we can now create an awesome horn armor. :3
(Leg pads are sorta like gauntlets . . right?)
Are these Beta? Or not? I never played during the beta days so idk. XP
(Beta crystal sands is awesome tho)

Well if they where beta, they aren't rare anymore. o-o
They have no value cuz they're in stores. :C
But even though they have no value, i can FINALLY finish my horn armor. :D 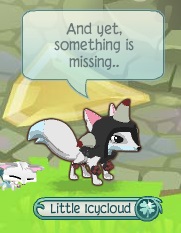 These are all returning items, but hopefully AJHQ isn't too lazy to make a new horned tail armor. :T
(AJHQ is sometimes lazy lel)
AJHQ is especially lazy with RIM's. o-o
(ALL of dem are recolors. ALL)
Well, nearly all of them.
But once in a blue moon, there's an awesome and epic rare. x3
(such as the paradise couch)
I made a story about the 3 horned armor.
It was fun.
And today, i shall tell yo how the horned leg pads came back from the dead. :D

AJHQ worker: ehh time to make the new item . . what? Why can't i make it?
What?
What?!
WHAT
Ugh messed up coding. Better fix it. :I

AJHQ worker: Whoa. I totes forgot about this item. I shud liek, release this into Jamaa cuz im too lazy to make a new item. lol.
*The AJHQ worker adds the horned leg pads into Jamaa clothing*

Before this item disappeared, it used to be quite popular. I wonder if it'll be popular again. xP

Well moving on, here's the DE post! X3
We have the 2 other winners of the Imagination fair for art and science! :D

Ohhh, so THAT'S what you're meant to do for art. XD
(Make an invention about art.)
If only i knew . .
Rainbow brush is a good idea though. So is the pet communication machine. I remember seeing that entry before. x3
So great job 2 all the winners! :D
But one subject remains . .
Maths.
Yeeaaah.
I feel sorry for maths now cuz no one likes him, ;-;
Uhhh okaay . . so i should do something about geometry since i like that.
*gasp*
I HAZ A FABULOUS IDEA! :D
Okaai so i shud totally make a machine that can measure shapes 100% accurately. There's settings for perimeter and stuffz. x3
I shud draw my invention right now! :D
Hopefully it wins . . cuz it would be amazing if it did. x3
(although i doubt it)
But there's probz few entries for maths, cuz maths is lonely. ;-;
(so does that mean i have a higher chance of winning?)
idk. :P
The animal avatars look so adorable when AJHQ draws them for the entries. <3
What if AJ was more 2D? I think the avatars would be cuter like that. :P
However, the 3D avatars in play wild are also cute. :3
AJ's avatars are . . idk.
They're 2D, but they have shading and stuff which makes them look sorta 3D. Soo yah. XP

But moving on, you know how there wasn't much gecko GIFs yesterday?
Well today there's more! :D

I know this is not a gecko but . .
PRETTY RAINBOWS

Yay for gecko GIFs XP
Lastly, here's the QOTP! :3
What's your favorite drink?
My favorite is either berry juice or tea. x3
Bye for now!