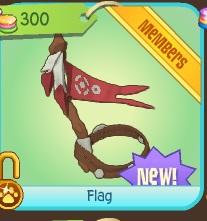 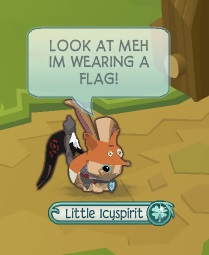 Owning a flag is normal, but WEARING a flag is pure awesome. :D
Yus, i know it's a rare flag. But the rare flag as better colors. Deal with it B)
[ Omg that emote though . . XD ]
Just noticed the symbol on the flag. What does it mean? It represents a  . . thingy . . aiming thingy? What do they call those? o-o

It also represents a target, somehow.
The flag either represents the shop target, or it makes no sense at all. :P
It also has eagle feathers.
Hmm . .
Nope. This flag represents nothing. XD
As the name says, it's a FLAG!
Wait. See that smaller dot? Maybe they could represent eyes, but one eye is aiming at something. I dunno. But that makes most sense. :3
Wait, eagles are birds of prey, right?
So it represents a hunting eagle?
*gasp*
That actually sorta makes sense! :O
I can't believe i figured something out without maths. X3
[ It's like you have to use maths to figure out anything . . PROVEN FALSE! >:3 ] 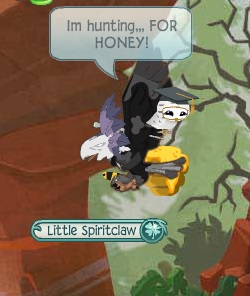 Because honey tastes yummy. :3
Wait. Did this eagle just land on the SKY?! 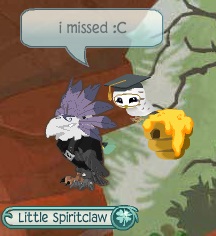 *gaaaassp*
YOU USED COMIC SANS!
NO ONE USES COMIC SANS! >:O
YA HEAR THAT?!

*Introducing . . The owl who uses fonts everyone hates!*

Comic sans is actually okay. But it's annoying how people use it inappropriately.
[ OMG. I SPELLED INAPPROPRIATELY CORRECT WITHOUT AUTOCORRECT! ]

Wowz. :O
I am surprised at myself. XP

The new poll has officially reached 100 votes. These are the results. :P 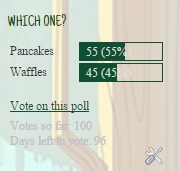 Wat.
Pancakes win?
I was not expecting that, since i thought people likes waffles better. XP
Either that, or the audience of the blog just likes pancakes better. :3
Waffles are so sweet, but pancakes are so soft. <3
I CAN'T DECIDE! >-<

. . . Or can i?
I actually have a favorite. But i won't tell you. >:3
muahaha
I don't actually have a waffle machine. ;-;
I have only eating a waffle 5 times. But they are DELICIOUS! :D
But pancakes . . i love them cuz they're plain.
People say "yuck" when i tell them i like pancakes plain.
BUT THAT'S JUST HOW I LIKE THEM, OKAI? >:C
Both are great. They are amazing. x3
Someone should attempt to make a waffle and pancake together. :D 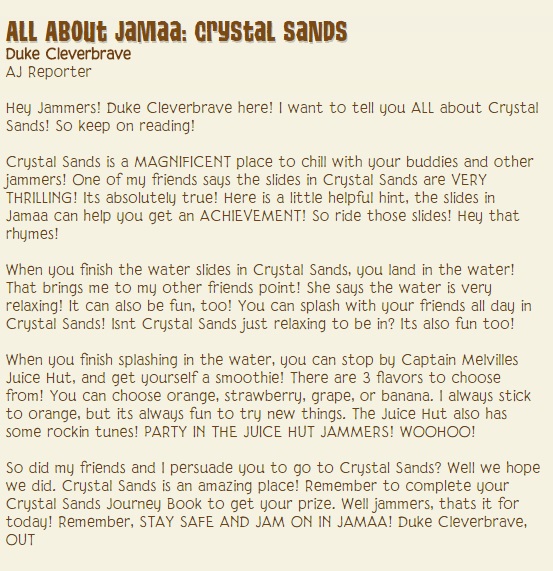 Again, another news crew contest i had no idea about. :T
Anyone else notice that Duke Cleverbrave looks sorta like my arctic wolf? :P

Crystal sands is awesome, but im concerned about the chlorine.
The new crystal sands is so plastic, what if there's chlorine is the water rushing down the slides? :c
Wait, nevermind.
The water comes from the mountains. XD
(i checked.)
No i really checked.
srs.

How does crystal sands lead to Mt. shiveer? Maybe some secret underground tunnel? Maybe there's a secret village full of bunnies in those tunnels? :O
AJHQ needs to make another village other than Jamaa Township. Like "sarepia village" or Mt. Shiveer village"
That would be cool, cuz then jammers can have homes in a lot of places. :3
(They already do . . remember the fantasy castle? But it would be nice if AJHQ actually showed those villages/towns. :3
Do you think there's any CITIES in Jamaa? I doubt it. It's not as high-tech as Earth.

BUT WHAT ABOUT THE SPACE ITEMS?! :O
Those are so high-tech that it makes you wonder: How can a place like Jamaa make these?!

I have said this a million times, but i have lost all hope in Animal Jam's logic.
I never actually said that. XD
[ i said something similar though lol. u know wat that is ]
"Animal jam doesn't make sense."

lel.
Anyways, i don't have any more time to the end the post, here's a True or False challenge! :3
(miss those? XP)

True or false?
Owls are not intelligent.