Hai! :3
Im doing the update post and chapter 2 of Cosmo's story today.
Just letting you know. :P
And also, i might not post some days this week, since i have tons of homework to catch up on, and blogging is a distraction from that. I have to put school first, i guess.
^ Also letting you know. owo 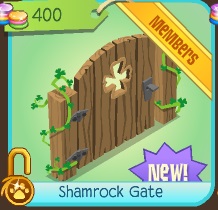 O my zios.
IT'S ACTUALLY A GOOD ITEM.
*throws confetti in the air*
woo sudden confetti. wut :I
But yesterdays new item was good too, and i didn't really post an update post (< Why i sometimes hate english.) so is AJHQ stalking my blog and whenever i don't do update posts, they come up with good items? >:U
They must have assumed im not doing one today either then.
BAD AJHQ >:U

^ I sometimes make up crazy stuff.

I also think that maybe in an alternate universe, im a ghost which is the reason why i get ignored so much at school.

^ THAT IS HOW CRAZY MY BRAIN IS.
Also, don't get me started on my "dreams . ."
I go to made-up places repeatedly, and do very weird stuff.

:I
why
Getting off-topic, aren't we?
The clover vine thingies give it a very nature-y feel. :3
Clover vines don't exist though.
OR DO THEY? * dun dun duuuun*
The other colours look slightly weird though. eh
And yesterday's new item was the shamrock fence if you're wondering. 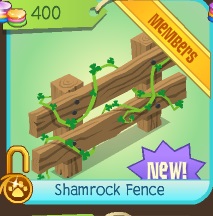 so yaaaaaaa
:T
It's those clover-vine thingies again. I don't even know if they exist.
Wait a sec . .
*processing information*

IT'S ANOTHER MADE UP PLANT SPECIES! :D
Then i will call it a clover vine.
^ (so kreative)
Scientific name = vitis trifolium
THE POWER OF GOOGLE TRANSLATE

"This is real." The seedling replied.

Suddenly, Cosmo felt strange. He felt overwhelmed.
"I-Im sorry."
He quicky turned around and ran away, and didn't look back until he reached the eucalyptus tree he had slept in in the morning. He climbed up, and clang onto a thick branch, closing his eyes tightly.
This has to be a dream! He thought.
It's impossible . .
He closed his eyes tighter to wake up. Nothing happened. He pinched himself with his claws.
Still nothing.

"Cosmo, what on Earth are you doing?"
It was Frost again.
"N-nothing . . nothing. Im f-fine." Cosmo stammered.
Frost narrowed her eyes. "I know when something is up. Don't think that im stupid."

"I can talk to plants!" Cosmo blurted out.

Frost just rolled her eyes. "You gotta be kidding me."

"I can hear what they're saying, Frost. I know it sounds stupid, but please help me make sense of this." He replied.

"Fine, fine. You really do seem worried, or perhaps you're just a really good actor. But im tired right now."

Frost clung onto another branch and fell asleep.
Cosmo just stared blankly at the bark for a few moments.

"I always knew this anyway."

"Wha-? Are you talking to me?" Cosmo said to the eucalyptus.

"Yes, i am. I know lots of things about you. Like the fact that you where destined to be an Alpha."
The tree replied.

"Nevermind all that, ha-"

"Do you have a name?" Cosmo interrupted.

"Twig." The tree replied.
Cosmo examined him. He was rather skinny and tall.
"Anyways, have you heard of Chomper plants?" Twig said.
"Nope."

"They used to grow a long time ago. They where pretty useful plants, eating phantoms and all that. But they disappeared a long time ago. However, there is a potion to make them again, but we plants can't do that since we don't have arms, and since you can understand plants, it would be helpful if you did do that."

"Of course," Cosmo said, "But what are phantoms?"

"They are dark creatures made of of shadows. They used to live in these forests a long time ago, but they somehow disappeared into another world."

So confusing . . Cosmo thought. But he didn't want to ask any more questions.

"Listen carefully. These are the ingredients you need to make the plants." Twig said.

It took a few minuets for him to say them all. But Cosmo strangely remembered them all, and set out to find the necessary ingredients.

"Is this good?" Cosmo asked.
"It's great," Twig replied, "Now crush then with your hands, and mix them up."
Cosmo got an empty coconut shell and started crushing, and mixing them up.

The gloopy liquid suddenly has small seeds inside it. They grew bigger.
How strange . . Cosmo thought.
When he was done, all that was left where lots of large seeds.

And cosmo did. As the seed touched the floor, it exploded which made Cosmo jump. But out of the soil, a large plant which looked like a venus flytrap emerged.

Cosmo was too amazed to reply, so he climbed up Twig and closed his eyes.

Final chapter will be coming tomorrow!
Unfortunately, i have run out of time so see you tomorrow! :D