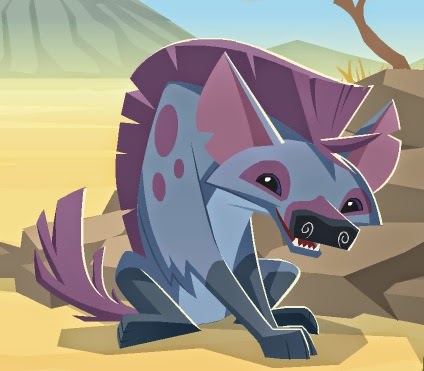 Hyenas are members only land animal which can be purchased at the Diamond Shop.
Before them being released, they where given a puzzle and some clues for jammers to work out- similar to the other animals. Their default color is blue-grey with purple markings & a mane, with legs that are a darker blue. Like other Diamond Shop animals, they have their own video called "Ambushed"
Alpha/Shaman
Like other diamond shop animals, Hyenas do not have a Alpha nor a Shaman.
A few people say Greely might be leading them - other than that, their Alpha is completely unknown.
Fun facts about Hyenas!

1. There are four species of Hyena: spotted, brown, striped, and the aardwolf.
2. Hyenas can go for several days without water.
3. Female hyenas tend to be more muscular and larger than the males.
4. Most hyenas are nocturnal.
5. Hyenas can live to a maximum of 20-25 years!